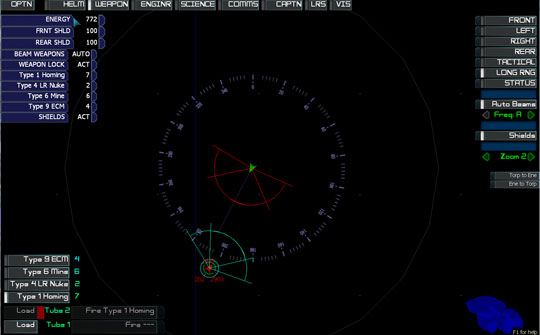 A friend of mine introduced me to this great game (or perhaps simulator) called Artemis. The official site can be found here.

It's a game meant for six people using six computers. There are five stations/consoles, each of which requires one player. The sixth player would be the captain, coordinating the ship and executing strategies. It's meant to be played at a LAN or similar, but it's also possible to play over the internet. Trust me though, it's way more fun to play when you're all in the same room.

I thought the game would be hard to understand, seeing as it's labeled as a simulator. To my relief, I was wrong. It actually only takes one round to understand how it works, which is great. Simple to understand, but hard to master.

It sells for $40, which isn't that much considering it's the price for the entire bridge. If you're unsure weather to give it a go or not, you could try the demo which is downloadable on their site.