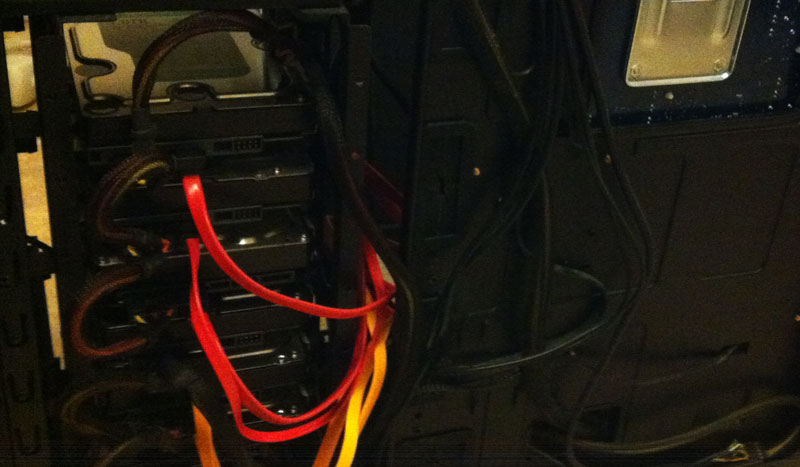 I've kind of forgotten to post about my "new" NAS, which sort of replaced my oldBuffalo Link Station Live 3Tb.

I had somewhat of a complicated relationship with the Link Station - on one hand it "did what it was supposed to", but on the other hand it didn't do anything else. Yes, it had a lot of nice features, but it couldn't run them because then it would run out of system resources.

So when I upgraded my PC (as in bought a new one, reused the SSD and one drive), I was thinking of converting the leftover hardware into a NAS.

I wanted the following features:
* More than 3T storage in one logical drive
* One disk redundancy
* Portability (Can restore volume on another machine)
* Semi-future-proof
* Silent (as in I should be able to sleep with it on)
* Encryption

Since I'm mostly familiar with Linux, I looked into some software-RAID possibilities. The idea was that I could install a distro onto a flash drive, thereby saving an internal HDD slot, and run a software RAID creating both one logical drive and giving me redundancy.

While researching, a friend of mine lost his array due to software error (probably some human error too, perhaps) when the system drive got corrupted. I didn't like the idea that some setups required configuration on the system disk because then the setup wouldn't be portable in case of a system failure.

I've had my eye on ZFS for some time, but never got around to implementing it because of the hardware requirements. Suddenly ZFS looked like a much better option. Originally I kind of wanted to run services on my NAS as well, which probably wouldn't be possible with the kind of memory ZFS requires. However, I knew that if I were to run a multitude of services on the same machine which also hosted all my files, I'd eventually break something important. So perhaps, I thought, it'd be better to just go for ZFS.

FreeNAS works flawlessly for me, albeit a bit slow at times. That might not be FreeNAS fault, though, it could be my SATA controller. It's currently hosting 3x1T and 3x3T of storage, shared over a gigabit interface.

The admin web interface is very responsive and the only operation that actually takes a while is volume mounting, which is to be expected. It's only done once per reboot anyway. You have access to pretty much all configuration from there, and a (somewhat laggy) terminal. A regular console is available if you plug in a display and keyboard.

Finally, let's round it up with a little bit of pros and cons.

Pros:
Point and click ZFS, with disk encryption and network sharing.
Extensive admin web interface.
Based on FreeBSD.
Can run from a CD or USB drive.

Cons:
If something breaks you might have to bring up a terminal.
You can't put files on the flash drive, i.e. scripts etc.
Could have been better at displaying system information, like S.M.A.R.T details and disk temperature.