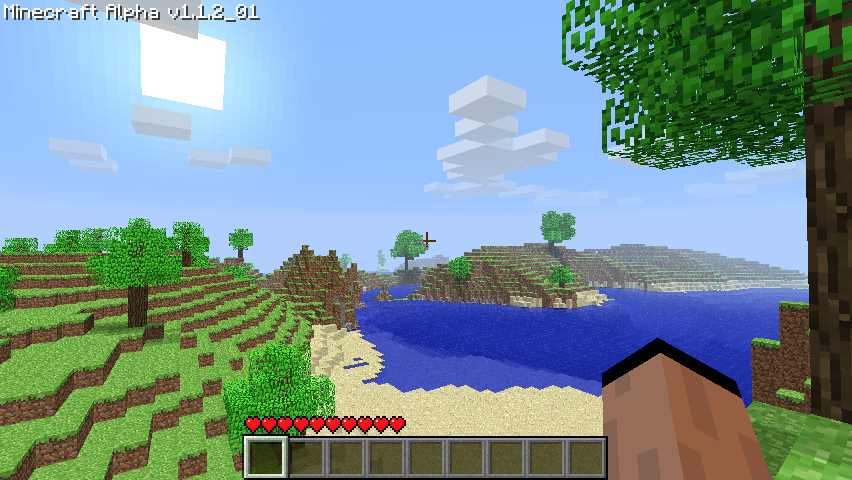 Recently, Minecraft have gotten a lot of attention. Mostly because the servers went down, and the game became free to play until it was fixed. So, what's the deal with this awesome game? What's the point, and how do you win (actually, you can't)?

First of all, it's a block-based role-playing first person (shooter?) game, and you live in a pseudo-generated world.

And it's awesomely addictive. This is going to be a full walkthrough, so press "Read more" below.

So what's the point of Minecraft? When you open the game you can either play solo or go multiplayer (which almost works). Let's go through singleplayer for now.
You got five worlds, or save slots, to pick from. Picking a new, or empty, slot will make the game randomly generate a new map for you. This is your world.
Okay, I'm in, now what? Well, the basics of Minecraft is the following: whatever you destroy, you can pick up. For example, press LMB (left mousebutton) to hit a block, and when it's destroyed it'll drop a block that you can pick up (most of the time, other blocks drop certain items and so on). Destroying a block of wood will give you one block of wood to craft with or place out wherever you'd like.

Did I say craft? Yes, I did. The basics is to MINE resources and to CRAFT them into what you need, hence the name - MineCraft. So what items can you make in minecraft from tree, sand, rock and metal? I'd recomend you to go to the wiki post with a full list (opens in new window). For a new player it might be hard to know "what you need", so read on.

To mine ground-level materials you don't need anything, as long as you're OK with the time it might take. I.e. a shovel will speed up the time it takes to mine dirt and sand, and an axe will help you mine wood faster. The only thing you need to think of is that you are unable to mine rock without a pickaxe.  That said, you can destroy a block of rock/stone but it won't drop anything. To build a pickaxe, use a workbench and build a "T", where the top is made of wood and the bottom part is made out of sticks.
How to make a workbench? Did you read the wiki? Okay, press "I", put your wood in one slot, get out a usable piece of wood (this is what I mean when I say wood, the refined type, not the one mined from trees). Then fill all four slots with wood, and get a workbench. Place it in your inventory and place it on the ground with RMB, then press RMB on it to use it.

Then night falls upon you. This is where things get tricky. Why? Because zombies will spawn and eat your brains. Seriously.
Okay, there are a few types of monsters, zombies being one of them. Skeletons (archers) are another type. Then we have spiders (big-ass spiders), suicide bombers and green blobs (like astroids, they spawn smaller ones on death -.-').
To survive, simply create a house and stay inside it. If you got any coal (looks like stone, but with black/gray dashes on it, mine it to get a piece of coal), combine it with a stick to get a torch. Torches will not only give you light, it will also prevent mobs from spawning in that area. Trust me, use them - I once died because a few zombies spawned in my basement. Not cool.

So keep on mining, use rock to build a new pick (stone at the top instead of wood) so you can mine metal when you find it. I usually mine during the night, and go hunting above ground during daytime. When I feel confident enough I try to kill some mobs during the night, just to get their drops. I.e. suicide mobs drop gunpowder if you kill them before they explode.
It's also useful to know that the sun kills every mob that is exposed. This means that undercround caves and dungeons can be full of monsters during daytime, so if you plan on exploring a cave-system, stash your belongings in a box before going. Items drops upon death, and dropped items stay where they are for around five minutes before they disappear. On how to build a storage box, check the wiki link in my post.

That's pretty much everything you need to know in order to play Minecraft. A few final hints:
1. When killing mobs or exploring, stash everything in a box. Trust me.
2. The bottom slot in a furnace should contain coal (fuel), took me a while to figure that out.
3. If you're planning to build a railway system, use minecart boosters to get speed.
4. When it starts getting dark, get back to your base. ASAP.
And last, 5. Build near your spawn, it sucks to die - respawn - and not finding your way back to your base.