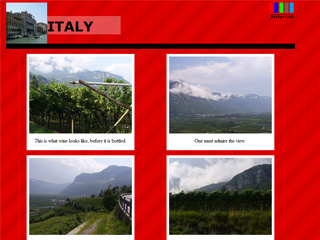 Last update was almost a week ago, so it's time to brief the internets about what I've been up to.

First of all I've done some minor changes to the front page, like a new header. The old header was made by a friend of mine (cheers Daniel!), so it kinda hurt to change it. I felt like the new one matched where I was going better, though.

Except from that the Archive now got new colors (or none at all ;D), in order to match the main page. I also improved the inner workings and how content is loaded. Later on I'm going to configure static links for the archive, get some SEO going.

Welcome to the brand-new contacts page! It uses a new image for every day of the week in order to mess around with spammers, not that I think they read emails off images though.

However this week's biggest project has been the Gallery. Last week I messed around with pictures of my friends in Photoshop, and it almost took longer to get the images online than it took to create them. My solution was to write a PHP-gallery that would load a series of images and their captions.

I’m going to release the source code for the image gallery later on, together with my sample album called “Italy” – which surprisingly is a set of images taken in Italy back in 2009 by me. Anyhow, for now it's a generic site with no personal modifications or copyright notices. Expect integration in my site later on, and stay tuned for the source if you'd like to use it yourself.

Next feature I'd like to implement would be to dynamically change the copyright notices on each page load. Or perhaps use the <blink>-tag.. hmm