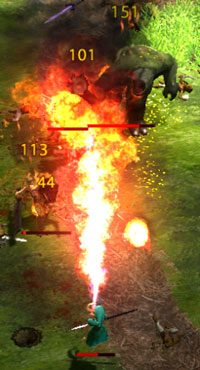 So there is this game called Magicka, which is super-awesome. It's developed by a couple of Swedes, so of course it's awesome.. d'oh.

Anyway, it's a comic-styled 3rd-person RPG (if you can call it RPG). There is no inventory, no shops and no awesome weapons. Instead you have the ability to control eight different elements and combine them into more powerful forces. This is the main idea.

This game is amazing, I'd spend 10 Euro just to get the humorous story and hear them speak in some made-up Scandinavian language. Want to know more and get a quick Magicka Walkthrough? Read on!

I've not completed the entire game yet, but so far I'd give it an 8/10 - despite some annoying bugs. If you count those in I'd go for a 5/10. Things like the idea, the concept, the "story" and so on are awesome, but the gameplay sometimes fails more than a retarded frog trying not to jump into a volcano (wait, wat?)... I mean, how fun is it to be stunned constantly until you die? Although it might be frustrating at times, simply not giving up makes the game worth playing. Sure I hate it, but I also get a sense of achievement when I finally make it.

As I mentioned I haven't finished playing Magicka yet, so the full Magicka Walkthrough might have to wait. If you need some hints or help with a specific part, feel free to drop a comment in the box below. Anyhow, here goes some useful information for you guys:

You got eight elements, and you can combine them freely except with their opposites. Example would be Life+Arcane, which would cancel each other out. Some enemies are weaker against some elements, e.g. the goblins hate fire. Since fire doesn't travel very far you could try combining Arcane+Fire to get a beam of fire.

One of my favorite combos is Cold+Lightning+Arcane, which will create a beam that slows and damages the target. A much better combo - but also longer - is Steam+Steam+Lightning+Lightning+Arcane. It's worth noting that Steam is not a regular element, you have to create it by using Water+Fire. I had a really hard time figuring that out since the game didn't tell me it was possible. Another is Ice, which is created by using Water+Cold.

Aside from awesome combos, you can also do Magicks (which is like normal magic except more awesome since you got a "K" in it =D). Magicks are special combinations of elements that's more awesome than, say, a beam or nova. An example would be teleport, which is Lightning+Arcane+Lightning. Of course you will have to find the spell book to "learn" teleport before you can cast this Magick. The first Magick you'll get your hands on is Haste (Light+Arcane+Fire). By scrolling with the mouse wheel you can flip through Magicks displayed underneath your character.

When starting a new Adventure, you should know a few things. First off, don't be afraid to explore. By doing so you'll not only find awesome gear but also get achievements. Secondly, remember that you can interact with the world. Cold will freeze water, for instance. Thirdly, be creative.

A big part of Magicka is to explore new combinations and to use them in a creative way. What about using a water-nova and then spraying cold over everyone? A lot of wet enemies - why not freeze them and then use Lightning?

Aside from that, you got weapon and staff abilities. Some might give a passive healing aura whereas some might give you the ability to teleport or raise the dead. Middle mouse button will trigger the active ability as long as your combo is empty.

I think I only got one more hint - Spacebar is the way to charge shields. Conjure a shield, point your curser on it, and press spacebar to charge it a little. Needless to say, you will have to spam spacebar in order for you to max it up.

That's it for now guys, drop a comment if you got a question! I hope I have the time later on to write a full Magicka Walkthrough.