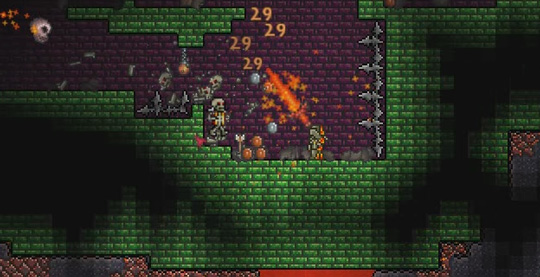 Terraria is a great game, but sometimes it can be a bit tricky knowing what to do. In this Terraria Walkthrough I'll guide you through the game one step at a time. If you have any questions after the walkthrough, just drop a comment!

You spawn in the center of the map, which is your "world". The size will vary depending on what size you chose at map generation, but in any case, you are in the middle.

The first thing you should do is collect wood. Punch some trees (hehe, Minecraft joke)! Wood is the basic resource and it's needed throughout the game, so make sure you get lots of it. In contrast to Minecraft (Terraria has been said to be a 2D-Minecraft, which is only half-true) mobs will come at you right away, trying to hinder you from chopping down those sweet trees. Do not fear, however, you should avoid getting hurt by facing the mob while chopping. It'll walk into your axe and get knocked back, keeping you safe.

Next up - shelter. In order for a structure to be considered a home it needs a few things, 4 things actually: foreground walls floor and roof, background walls, light and a door. If you want an NPC to consider it a house, you will also need a table and a chair.

The first thing you should learn is how to pay attention. Slime jump two short jumps and one long jump - it's a pattern. Make sure to keep that in mind while venturing into the unexplored. At night, it might come in handy knowing how the flying eyes navigate. Or how the zombies tend to come straight for you.

Combat is the never-ending heart of Terraria. There will always be an enemy close nearby, and you will need to reserve 2-4 slots for weapons. Knowing how to fight is golden, so heads up!

The first level is ground-level, logically enough. Here you will encounter daemon eyes, zombies, slimes and a few other mobs. There's floating islands in the sky, if you didn't know.

The second level is the dirt-level. Basically everything below ground that has a brownish background is dirt-layer. Mobs include slimes, worms and whatever might drop down through the tunnels.

The third level is called the stone-layer, with good reason. It's defined by a grayish background and a lot of stone will be found here. Skeletons will be found here (or they will find you!), as well as mother slimes, slimes, worms and whatever that have followed you down there.

The fourth level is not one you mess around with, nor is it what you might expect - it's the underworld. Here huge bone serpents will try to impale you while fire-shooting and teleport-able imps hurls fireballs towards you. Strap yourself in, a knockback might push you into a lake of lava.

There are multiple resources in Terraria, and most of them make what I choose to call Gear. Gear can be divided into different tiers, wood being the basic one. Copper is better than wood, and metal is better than copper. Then we got silver, gold, demonite, meteroite, hellstone. Bone and cobalt should be in that list somewhere as well.

By gear I refer to a full set of armor together with a pickaxe, axe, hammer and sword. Except making gear, minerals and resources can also be used in combination with others in order to craft special items such as candles, storage boxes, depth meters and watches.

Basic crafting does not require anything special, but more advanced crafting needs a workbench. Iron anvil and a furnace will also be needed for some items. An alchemy station (placed bottle) is required in order to make potions. Table is needed in order to make a watch. Hellforge (can be used down in the underworld or brought back up by destroying and picking it up) is needed to construct hellstone bars.

When the world meets certain criteria, an NPC will arrive and move into a player-built house - this is the reason why building is so important. The most basic NPC is the merchant, which will arrive when a player has 50 or more silver. Other NPC's include Dryad (slay boss), Demolition Expert (acquire a bomb), Arms Dealer (acquire a firearm) and Medic (have enough expanded health).

One item you want to purchase from the merchant is the mining helmet. It allows you to mine freely and not worry about light. If this is not your first world, then you might want to get the piggy bank first. The piggy bank is like the stash in Diablo 2 - it's a storage box that remains the same for a character between worlds. Additional features include awesome appearance and theft-protection.

Gold farming is easy since the last patch (hold right click to mass-craft). You will get plenty of cash by making bottles because sand is easy to mine. Torches (wood+gel) yields more cash per unit, so if you plenty of it, put it to good use! Another (and better) option is to sell silk, which can be crafted from ten cobwebs. You need cobweb for bone gear and for making a bed out of silk, but if you already have a bed you can make the rest into silk and sell it to the vendor.

Try not to buy things from the NPC's, save your cash for later (minishark gun for example!).

Oh, how we love that loot! There's a ton of loot in Terraria, so if I'm going to help you out.. I have to tell you about the artifacts and drops. Now, good gear can be crafted, but awesome gear and accessories can only be found. We have a few basic drops, such as the Zombie's shackle (+1 defense), but they can't be considered artifacts.

Some semi-good drops can be acquired from monsters, such as the Ball 'o hurt (ranged weapon), but the best gear is only found in storage boxes. When venturing underground, make sure to look for those boxes! Most of the time you will find standard consumables (torches, potions, arrows), but sometimes you will find good loot. Artifacts such as Cloud in a Bottle (allows double jump) and Hermes Boots (faster movement speed) are highly valued in early- and mid-game.

End-game you should look for the Cobalt Shield, which removes any knockback caused by damage. You should also get some obsidian and craft (yep, this one is craftable) an obsidian skull, since it makes you immune to fire damage from blocks (= can easily mine meteroite).

Alright, we're almost done with the Terraria Walkthrough! So, what about those bosses? There are three bosses at the moment: Skeletron, Eater of Worlds and the bigass eye, which name I have forgotten.

The first one can be found at the edge of the map, as mentioned before. Talk to the old man at night and you will (hopefully) prevail and can enter the dungeon safely. The worm and the eye must be summoned by either slaying a shadow orb or creating an item that on consumption will summon it.

To craft the "bait" or summon-item you will need to find a daemon altar, which can usually be found at the bottom of those deep holes in the corrupted zone. They can sometimes be found outside or near a corrupted zone, but your best bet is to jump down that hole and look for one there. Use a grappling hook to get up if you didn't hit jackpot. Do not hit the altars with a hammer - they will remove half of your current HP.

To summon the eye, you need 10 lenses, which are dropped by the small annoying eyes. Go farm! The worm needs some rotten meat (go slay some eater of souls!) and some vile powder (mushrooms found in a corrupted zone crafts this, use an alchemy station). The eye can only be summoned at night, and the worm can only be summoned within a corrupted zone.

Some additional stuff for this Terraria Walkthrough... uhm. Shadow orbs are found at the bottom of corrupted holes, you need a demonite pickaxe or better to mine the stone down there. Smash the orb with a hammer, and be prepared to see what happens. They'll drop good stuff, they can trigger a meteor (=meteroite to make gear out of)... but they can also summon a boss - so be prepared.

Hellstone is found in the underworld, which is far far far down. Make a tunnel going straight down if you need to farm it - it's worth the construction time. Me and my good friend Daniel made a tunnel and we saved a ton of time in the end! You should of course not make it all the way down, no, stop at the end of the stone layer to make sure imps won't spawn where you drop down. Your tunnel can be used to move large amounts of water down underground, and you can lead it to a lava source in order to make obsidian.

Do you have anything to contribute? I bet you have an opinion of your own regarding the game and how things should be done - why not share it? Same goes for any questions you might have!
Thanks for reading!