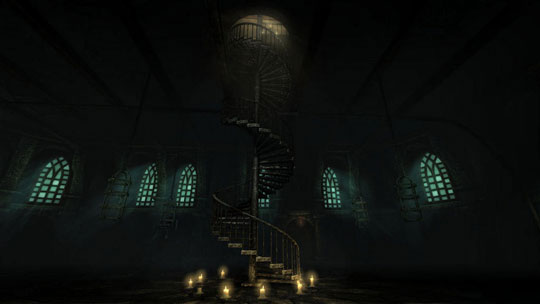 So here's the deal: I don't enjoy horror movies. I find most of them boring and the only thing keeping me in front of the screen is the time I've invested so far in watching. I'd rather finish a bad movie, then to watch it half way and walk out. I rarely watch any horror movies anymore.

However, I like scary computer games. I enjoyed Quake 4 and Doom 3, both because they're good games, but also because of the horror. F.E.A.R is another great game, which puts more emphasis on this. I find it surprising that I can enjoy horror in one form, but not in the other. Perhaps it has something to do with the interactivity.

So I've played Amnesia before, and quit. Being unable to protect yourself contributes a lot to the overall feel. This, combined with playing at 3:00 at night made me freak out. Playing F.E.A.R at 3am is awesome, but it's a whole different kind of horror.

I finished Amnesia some days ago. In retrospect, the game wasn't that scary at all. Not knowing is a huge factor.

I still have two and a half games in the Penumbra series to finish (same developer as Amnesia). The first one isn't as scary as Amnesia, because you have the ability to defend yourself. Hiding is easier. Monsters don't appear out of nowhere to the same extent as in Amnesia. Still, I think it's amazing how the developer managed to create so good horror games. The games does require some effort in order to be scary, but they've made a good job at sucking you in. If you don't care about dying or about the story, then it's not going to be a lot of fun. If you do enjoy puzzles,  role playing and being immersed... then it's awesome.