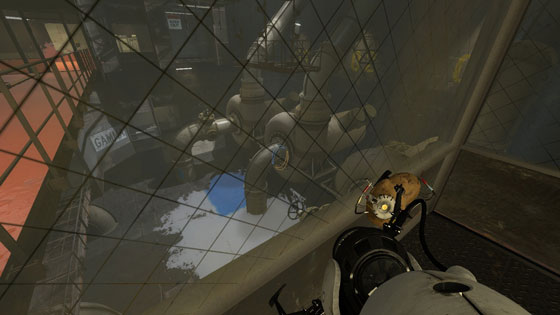 I can't wait for Valve to release a DLC (or the community to create a map pack)!!!1one! When I have time I might create a few maps myself (not banging rocks here, I do know how to make a map in Hammer). I just quoted Cave Johnsson. Kinda. Remaked. Same stuff. Anyway.

Portal 2 is a real game, which Portal 1 wasn't. You got a real story and more gameplay. Puzzles are harder and there is a lot more thought (and money) put into it. This is why I love Valve-games - they own. It's never a question about quality, it's a question of awesomeness.

New additions include three types of gels (white - portal-friendly, red - propulsion, blue - repulsion) and a force-field that either push or pull you. And, of course, lasers, new cubes, launch pads, balls and humor.

P.S The Portal 2 ending song wasn't as good as I would have expected. "Still Alive" is still the most awesome song in the world, and this.. whatever it's called.. doesn't even come close. Although the turret song is truly awesome. All heil the king of turrets!